The Northern lights season has started!

There is no switch to turn on the northern lights. Seeing them primarily depends on a combination of four main elements: darkness, clear skies, extreme northern latitude, and solar activity. Winter on Lofoten already covers two of these elements: darkness and northern latitude. Clear skies and solar activity are more or less left up to chance. Areas that are not subject to 'light pollution' (for example; street lights and flash lights) are the best places to watch for the lights.

With low intensity auroras, a faint, almost cloud like glow will appear in the night sky. Barely perceptible to the eye, if you pull out your camera and make an exposure of several minutes, you will see the light is green. When the northern lights are strong, the dancing lights will be visible to the naked eye. On these nights, you really know you’re seeing the northern lights as they swiftly move across the sky.

The bright dancing colours of the northern lights are collisions between electrically changed particles from the sun that enter the earth's atmosphere. They are only visable above the magnetic poles of the northern and southern hemispheres, up here in the north they are called 'Aurora borealis'. The lights can appear in many colours although pale green/ yellow and pink are the most common. Shades of red, yellow, blue and violet can also be seen from time to time in the dancing shapes of the Aurora.The lights can appear in many forms. Everything from patches or clouds of lights to streamers, arcs, rippling, curtains or shooting rays that light up the sky.

What causes the Northern lights?

The Aurora borealis are the result of collisions between gaseous particles in the earth's atmosphere and charged particles released from the sun's atmosphere. The variations in colours are due to the type of gas particles that are colliding. The most common auroral color, a pale yellowish-green, is prodused by oxygen molecules located about 60 miles above the earth. The rare all-red auroras are prodused by high altitude oxygen, at hights of up to 200 miles. Nitrogen produses blue or purplish-red aurora.

The temperature above the surface of the sun is millions of degrees Celsius. At this temperature, collisions between gas molecules are frequent and explosive. Free electrons and protons are thrown from the sun's atmosphere by the rotation of the sun nd escape through holes in the magnetic field. Blown towards the earth by the solar wind, the charged particles are largely deflected by the earth's magnetic field. However, the earth's magnetic field is weaker at either pole and therefore some particles enter the earth's atmosphere and collide with gas particles. These collisions emit light that we perceive as the dancing lights of the north. 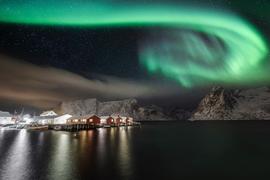 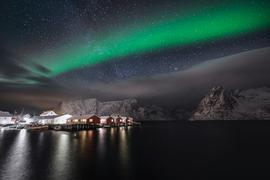 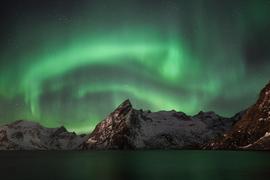 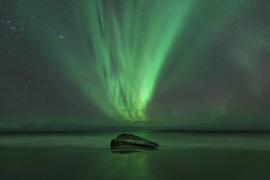 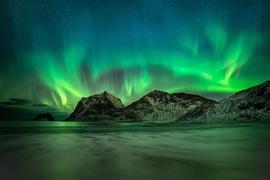 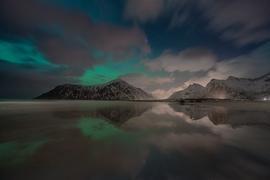